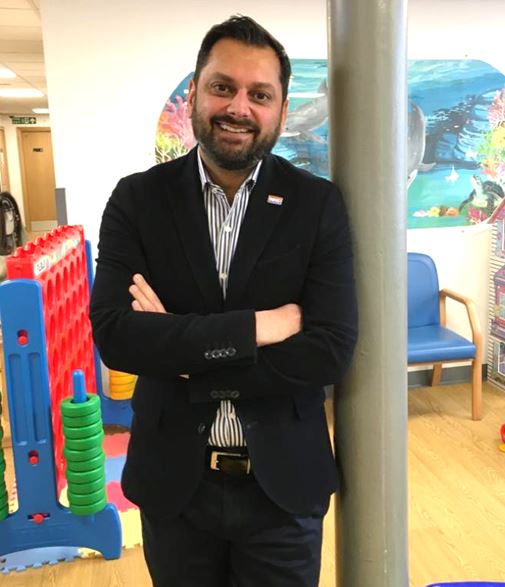 He reckons "I always remember it’s nice to be important but it’s more important to be nice’."

So well done Sal and here's more from him in our latest Hello My Name Is.... Sal Uka.

What is your position?

Associate Medical Director for Medical Workforce at CHFT however, from January 2020 I will be the new Medical Lead for WYAAT (West Yorkshire Association of Acute Trusts). WYAAT is a collaborative between the six acute Trusts (including Harrogate) across West Yorkshire. There are already several projects underway across the region including in vascular, pathology and radiology services. My role, along with my new colleague Matt Graham, Programme Director, will be to ensure we complete on these. I also want to develop a range of clinical and non-clinical projects so that we can ensure that all our patients across West Yorkshire and Harrogate get the very best hospital outcomes and experience. It’s also important to me that our NHS colleagues are involved so that they can deliver their best care, whilst feeling valued and empowered.

I came to Leeds Uni in 1994 and after graduating trained in paediatrics across Yorkshire. I started as a Consultant in Paediatrics at CHFT in 2009. Since then I’ve had several leadership roles including Clinical Director for Children’s Services, Divisional Director for DATS (before it merged to become FSS) followed by Divisional Director within the Quality Directorate. In 2016 I became Associate Medical Director and led on the Quality & Safety portfolio. My leadership highlights so far include implementation of Nervecentre including HOOP and the Deteriorating Patient Group which along with Learning from Deaths has led to CHFT’s significantly improved mortality ratios. Over this past 18 months I have been further developing my clinical leadership with colleagues from the NHS Leadership Academy. This inspired me to be more active in Equality, Diversity and Inclusion, and in June 2019 I co-hosted on behalf of CHFT, the first NHS North of England LGBTQ+ learning event alongside NHS England and the Royal College of Nursing.

What is the highlight of your career so far?

This is a tricky one as so much has happened over the years but if there’s one it’s being selected by the NHS Leadership Academy as one of thirty future executive clinical leaders in England. It was a competitive process and I would say that I have changed so much from the programme. I officially graduated in February 2019, but I still get to meet and learn from colleagues from across the country.

Sum up your role in three words – Change through Influence

What did you want to be when you were growing up?

Ha! Not a doctor… actually I quite fancied presenting CBBC in my very own broom cupboard! Who remembers Gordon the Gofer?

Who is your hero/heroine and why?

This is going to sound boring, but I don’t really have a hero or heroine. I think we all have attributes that others will at times admire. Values and behaviours mean more to me, I always remember ‘it’s nice to be important but it’s more important to be nice’.

When you are not at work, how do you relax?

I’m a bit of a foodie, so if I’m not cooking I’m eating! I also like to travel, and I’ve been to some amazing places. I like visiting museums, galleries and going to the theatre followed by dinner… did I mention I like food? To be honest I like nothing more than quality time with friends and/or family preferably a bite of something delicious and a glass of vino!

What is your favourite place?

I’m a city boy at heart and some of my favourite places are Rome, San Francisco and New York. I love the hustle and bustle as well as the sights, sounds and smells!

What would people be surprised to know about you?

I’ll eat absolutely anything including things that most people wouldn’t touch like kidney, snails and bone marrow. But I won’t eat Brussel sprouts… I can’t stand them. Literally the only thing I won’t eat!

Twitter/Facebook? C’mon… it’s all about Insta these days